The Voyage of Music and Art
by Diane Reed

I was born in Denver, Colorado on February 3, 1945. My Mother named me after a song. She had studied music at the University of Colorado. My Father was stationed in Colorado Springs Army Reservation. He was a radio announcer there and my Mommy sang for the troops.

We moved to Haddonfield, New Jersey when I was 2. That is where I grew up – not far from Philadelphia, Pennsylvania where my Daddy’s Family lived. He was also a Graphic Artist and an Actor. He was the leading actor of the Haddonfield “Plays and Players”.

My Mommy became a Choir Director and a Piano Teacher. When I was 5, I started taking piano lessons and when I was 9, my Mommy taught me how to sing. She also had 3 more children there,
Richard, 4 years younger than I, Christine, 5 years younger and Larry, 8 years younger. Rich and Larry both becam musicians and Chris became a clothing designer. 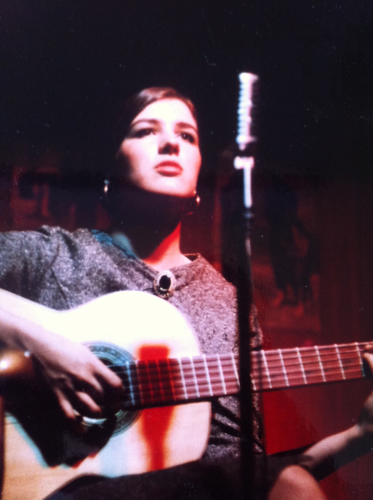 Lady Di at the age of 18 playing the guitar

My Daddy took me to my first Coffee House when I was about 15. I was so impressd and knew I had found where I belonged. I also heard Joan Baez, Peter, Paul and Mary, and knew that I wanted to become a Folk Singer. I began playing the guitar when I was 16. Richie also began learning guitar, he was 12, but he had a teacher and I didn’t, so I was always running to him saying, “Richie, show me how to do this, show me how to do that!” We began playing in Coffee Houses. About that same time, I went to see Joan Baez at a concert she gave in Haddonfield. She was a tremendous inspiration to me. She had brought Bob Dylan with her because she sang many of his songs. I went back stage after the performance to give her a portrait I had made of her and won First place in an Art competition in school. Bob Dylan was sitting about 10 feet away and I still think, “Oh! I should have at least taken a better look!” 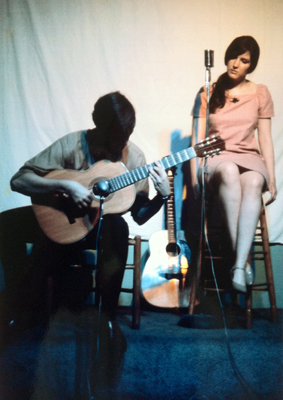 When I was 18 my parents divorced and I moved to Philadelphia. I continued to play in Coffee Houses, such as The Second Fret, and the Guilded Cage, sometimes with Richie, but often alone.
I also met a nice young man who was an amazing guitarist. He became my husband and Richie’s teacher. He played Classical, Flamenco, Jazz and other popular stiles. Unfortunately, our marriage did not las more than two years, but I did some recording in New York with him, singing background for a movie, “Mine Eyes have Seen the Glory”, starring Gary Merril.

After the divorce, I moved in with my Daddy in Baltimore, Maryland and worked with him in his Graphic Arts business. In the area was a Botega where several types of Artists were, such as a Potter, a Glass-Maker and a Woodworker. One of the Woodworkers was very special. We started a relationship, but it only lasted about 9 months. Close to the Botega was a farm where one of the Artists lived. While visiting there one day, I met Frani Bell who took care of the horses. She wanted to learn to play guitar and I wanted to learn to ride a horse, so we traded lessons and began living together and performing together. We were together for 7 years during which we played in Coffee Houses, Folk Festivals, Schools, and Churches. During this time I began making portraits of horses and teaching guitar. During this time I met many more Singer/Songwriters such as John Denver, Tom Paxton, Eric Anderson, Steve Goodman, Linda Rondstat, and, very specially, Judy Collins for whom I sang backup vocals on her song, “Cook with Honey”, which became very popular, I’ve even heard it recently on the Radio in Holland. 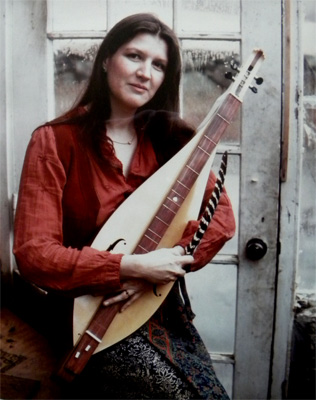 Lady Di and her dulcimer

Frani and I were big fans of Peter, Paul and Mary and went to many of their concerts. We discovered that Mary lived in Connecticut, not far from where we lived. We went to visit her and her husband, Jerry Taylor asked me if I would like to do an impersonation of Joan Baez on an album he was working on – he was one of the producers of “Saturday Night Live”, a comedy show on television. Of course I said, “Yes”. While we were recording this song, there was another of my most favorite Singer/Songwriters recording right down the hall – John Denver! I met him and saw him many more times in Coffee Houses, one in particular was “The Main Point” in Brynmar, Pennsylvania. He recognized me, and I got a smile and a “Hey, how are you doing?”. What an honor. Frani and I stayed and worked together for about 7 years after which I moved to Watertown, Connecticut and began teaching at Taft School, and Westover Academy for Girls, two of the most famous New England Boarding Schools. While I was there, I joined a neighborhood church where I started singing in the choir where I met Marion Preston, who said, “Oh, we have a son who plays guitar, you should meet him!” Then I got a bad cold and went to see Dr. Preston, Marion’s husband, who said the same thing to me, “We have a son who plays guitar, you should meet him!”. Russ was living in Maine at that time, but soon he came home and I was invited to dinner. We were married on the 22 of May, 1977. One day about a year later, I went to visit some old friends of mine who lived in Pennsylvania. Al de Prospero was a teacher and a writer. In his poem he referred to his daughter as a “Child of Light”. (See song Bio’s) Russ and I had a daughter, Cynthia who was born on April, 22, 1979. 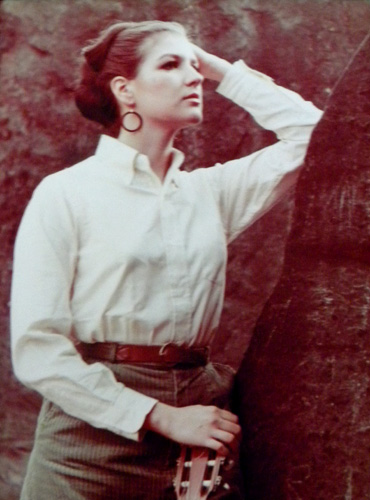 Unfortunately, Russ and I became separated in 1981, and I moved to Bethel, Connecticut, a town where I had been performing called, “The Opera Cafe” . I also began a career as an Artists’ model, a job with which I was able to support myself and Cynthia. During this time, one of the artists, Beverly Branch, who helped me get more modeling jobs, came to my birthday party on Feb. 3, 1984. She brought with her a very attractive and nice, young man, a jewelar who was staying with them and working in the area. His name was Hans van der Leen. We got together in March and were married on November 1, 1984. We went to Holland where he was from, for our Honeymoon.
There I met his wonderful family, and fell in love with the Country, too. We stayed there for 3 months. We returned on the 27th of February, 1985 and our Daughter, Gaia, was born on November 26th, 1985.

At one point, regarding Russ, Hans said to me, “This is the Father of your Child, Cynthia, and I want you to be friends with him. We have remained friends to this day. Hans was the “Stepfather”, know in Holland as the “Support Father” of Cynthia, and Russ was the “Support Father” of Gaia.
Hans and I stayed in America until July, 1999. Cynthia did go to Westover Academy for Girls, where I had the privilege of singing with their Glee Club on occasion, and singing for Cynthia’s graduation, a song I had written, and the Dance class created a dance to it which was also performed at the graduation. Just before we left to live in Holland, one of the last things I remember was Russ and Hans watching Football, laughing and talking together. What a great memory!

We have been here 13 years. In 2001, Cynthia got married and had a child, a boy called Russell, after his Grandfather. I was present at his birth andremember thinking, “Ah, with New Souls coming into the world like this one, the Future will be safe. While living here in Holland, Hans started his own Atelier in Utrecht wher he teaches the ar to Jewelry making, and, of course, makes his own Jewelry and for customers. I have the honor of helping him and playing music for his students from a Balcony where I do not disturb their work. They are very happy with my music and I am inspired by their work and compliments. I have also performed her in Holland in Restaurants and Special events in Castles.

I have also joined a wonderful Artists’ group called, “The Toets”, where I meet other artists. It has been very inspiring.

So, now my Life’s Dream is coming true, in the land of Beauty, Antiquity, Music and Art!

Here is the Music Player. You need to installl flash player to show this cool thing!

Search and you will find